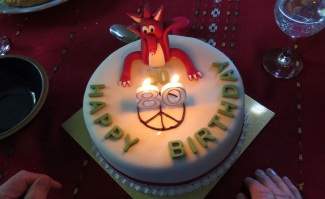 It’s taken many years (80 to be exact) but I’ve become an octogenarian. Hopefully this will mean that my words of wisdom will receive greater attention – although I fear not.

Judy and I first met in 1956 and, during our 57 years together, we marched together against UK/US government aggression in Suez, Vietnam and Iraq, against nuclear weapons and cruise missiles, the poll tax, the bedroom tax, apartheid and austerity and for a Parliament for Wales and numerous green, countryside, democratic causes for which history has (or will soon) judge us on the right side of history.

I have a clear conscience on all these issues but sadness that evil people still hold the reins of power. Also, during our lifetime, several former comrades and friends became apologists for the rich and powerful in our most unjust society. The richest 1% in Britain now own over 50% of our wealth while still, through their control of the mass media, pitting working people against each other rather than against the exploiters.

I intend to use my remaining years to campaign, as before, for peace, justice and the environment and hope that future generations may take heed of my lifetime experience to succeed where my generation has failed.

I believe this blog (created as a short-term election blog) is as good a way as any to comment on political issues (though less often than during the election period). When I master the software, I will give it a less cumbersome name (soon I hope).

If not already, please become a ‘follower’.

Leanne and Caroline in 2007, during a blockade of Faslane.

Today (7th May) is a good day for nostalgia – tomorrow is for reflection.

I have campaigned alongside Greens and Plaid against nuclear weapons and for green aspirations for decades – but saddened by the hostility of some Green Party members to Plaid Cymru during this most divisive election campaign.

Both parties (and socialists both within and near to other parties) share hopes for a better greener world and a more community-friendly society. Personally I can see no justification for the hostility I have witnessed in recent weeks.

Looking to the National Assembly elections in 2016, I hope for a more obvious green presence in the Senedd. This can be achieved if the Wales Green Party and Plaid Cymru agree a joint list of candidates for the regional elections.

I fear that, if recent Green/Plaid hostility (in Wales) continues for the National Assembly elections, it will be detrimental to the causes espoused by both the Wales Green Party and Plaid Cymru .